What great fascination Marguerite Yourcenar would have felt if she had discovered that all the effort condensed in Opus Nigrum has not been constricted to the pages of this book! And that is reasonable, once the transgressor alchemist vocation is pierced by the rediscovery and new meaning granted to one of his founding elements.

Blood has been associated with many different processes and meanings in continental European thought and Western culture. Blood is not only inscribed in the processes that generate life, but also in the decomposition that death propitiates. Blood betrays the loss of virginity in women. Blood as offering in some Indo-American and Afro-Cuban cultures. Wine transfigured into blood in the Catholic ritual, the chalice that shelters the wine, symbol of Christ’s blood. Blood as endlessly pursued delicatessen by Nosferatus in his eagerness to perpetuate his “life” in death. Irony of life. Blood as identity, as code that registers belonging to one group or another. Blood as density in suicide. Blood on the hands of murderers, even if not perceivable. Blood as ingredient in the feast of the protectors. Blood in streams that flood the torture precincts. The blood that seals a covenant, the blood that is shed for unmentionable causes. Duels at first blood. The blood that sprouts when giving birth, as of one who can only give account of this act with blood. Or simply, the blood that cures Cemí’s asthma once he “releases orange-colored, almost bloody water where scales seemed to float”. 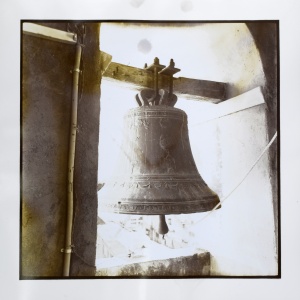 Blood, over and over again but never the blood associated with the mysteries of developing, with the chemistry that brings out the ghostly images that inhabit photographic paper. And it is so because perhaps Reinaldo Cid is a sort of Greek sorcerer or an alchemist who worships primitive deities. No one knows if in these deeds he cultivates for himself the flower that helped Odysseus defeat Circe with blood from the giant Picol. We cannot assure that his photographic enclosure is not another pretext to descend to Hades and return to the light carrying so many bells silenced by immobility and idleness.

Seeing the uneasiness that floods the world with the digital image, Reinaldo returns in a stubborn exercise of genuflexion to the primordial procedures, not to reproduce them, not to ennoble himself as the feline that besieges us in the impetus of tenderness, but to rethink them. Here lies his conceptual and formal sharpness. The dialogue with a photographic tradition subverts the discursiveness and causality that, in José Lezama Lima’s words “becomes monotonous and impoverished”.

The often employed argument about the “post-photographic” provoked by the digital image has paradoxically recovered “rusty” genres. That is one of the reasons why thinking about photography is an exercise that seeks to discover a non-apparent structure behind the visible. The “apparent” immobility of his objects operates an unusual symbolic violence.

Feromonas is a series that presents ideology as a human phenomenon insofar as its forms are expressed and influence the configuration of the subject. Feromonas is based on a photographic census of all the bells that are currently ringing on the island of Cuba. The register does not establish distinctions between their locations or the principles to which they respond; the photographs merely show the bells as they appear in their locations. The series proposes a kind of reversal in terms of procedure. After the negatives have been revealed and turned into positives, the images are submitted to an experimental process where a “substantial” change takes place. From the traditional photographic turn, where metallic oxides are replaced by others through chemicals industrially elaborated for this purpose (silver oxide contained in the paper emulsion by means of a bleacher), the copy is immersed in blood for approximately 24 hours. At the end of this period, the copy is extracted and subjected to several washing and drying cycles. The result is the reappearance of a new image, but this time through the absorption of the iron contained in the blood.

The rituality of this procedure connects with the ancestral wisdom since the blood creates blood, resulting in an alarming image that, from the immobility of the bell, makes an alert call on violence as social phenomenon. At the same time, the photographic series Estela (2012) is also a ritual, a kind of exorcism that has accompanied a maturing process. Inquiring into the states of human transfiguration, be it from the relationships with certain power structures, as well as from the cultural discourses about life and death, Estela “closes” the moeblio tape that life ultimately is.

Using the glass of the precarious Cuban coffins as support, Reinaldo impregnates each one of them with a personal code. The epigrams of blood that converge in them generate a sort of metaphorical pattern that is transubstantiated in the identity of a deceased individual. The symbolic life-death game is established in the work through the manipulation of the support in the “traditional” terms of photography.

Moving on a tremendously cryptic plane, Reinaldo Cid regurgitates his fascination with totally unconventional procedures in the field of art, making them unique and credible. And it is precisely this capacity that makes him investigate those bordering zones where the symbolic emerges in what Lezama called the obsession that never destroys things, but rather searches into the evident, the hidden, and the secret, into what ascends so be configured by the light. 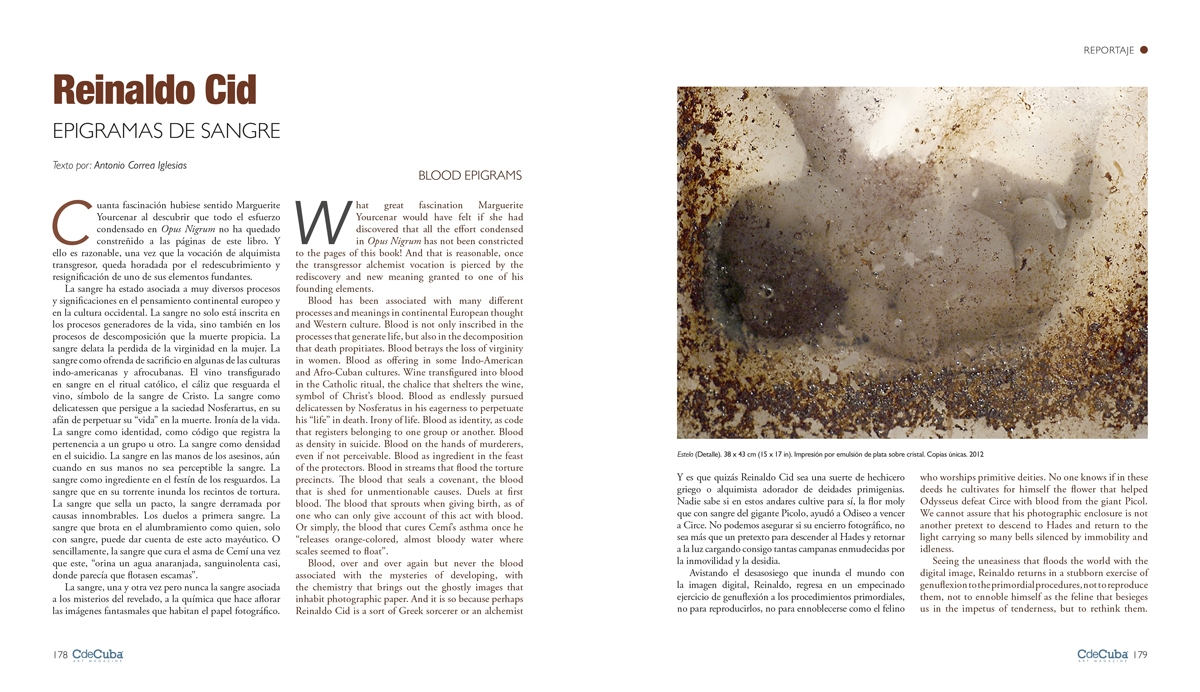 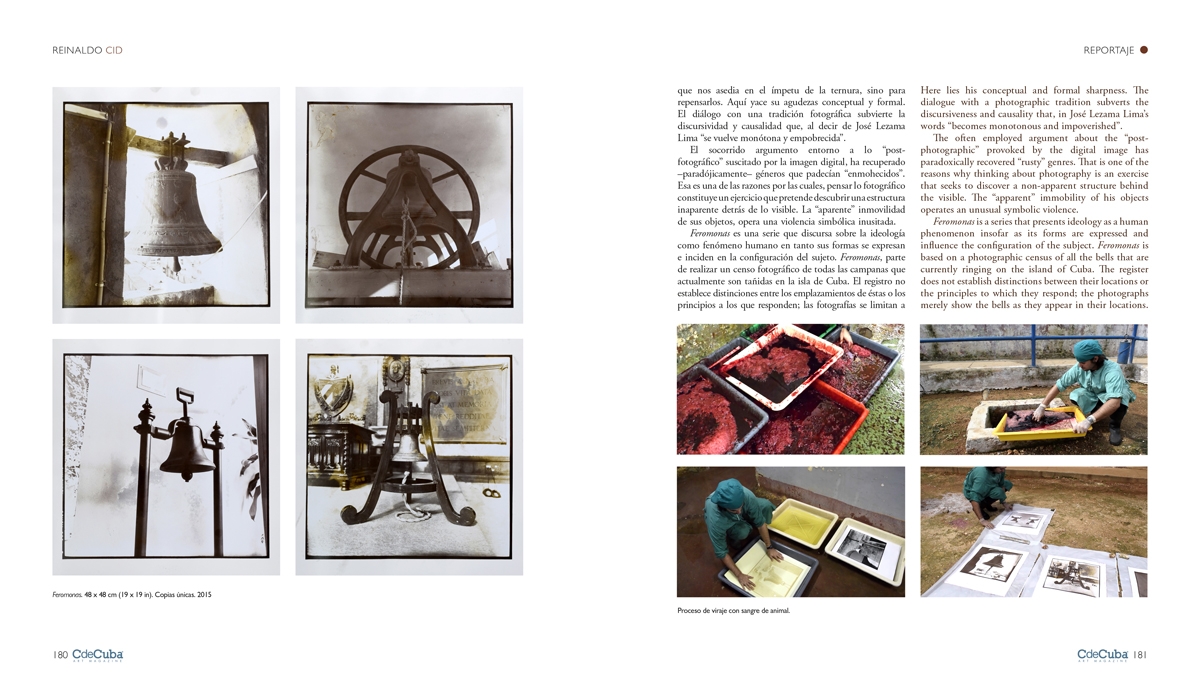 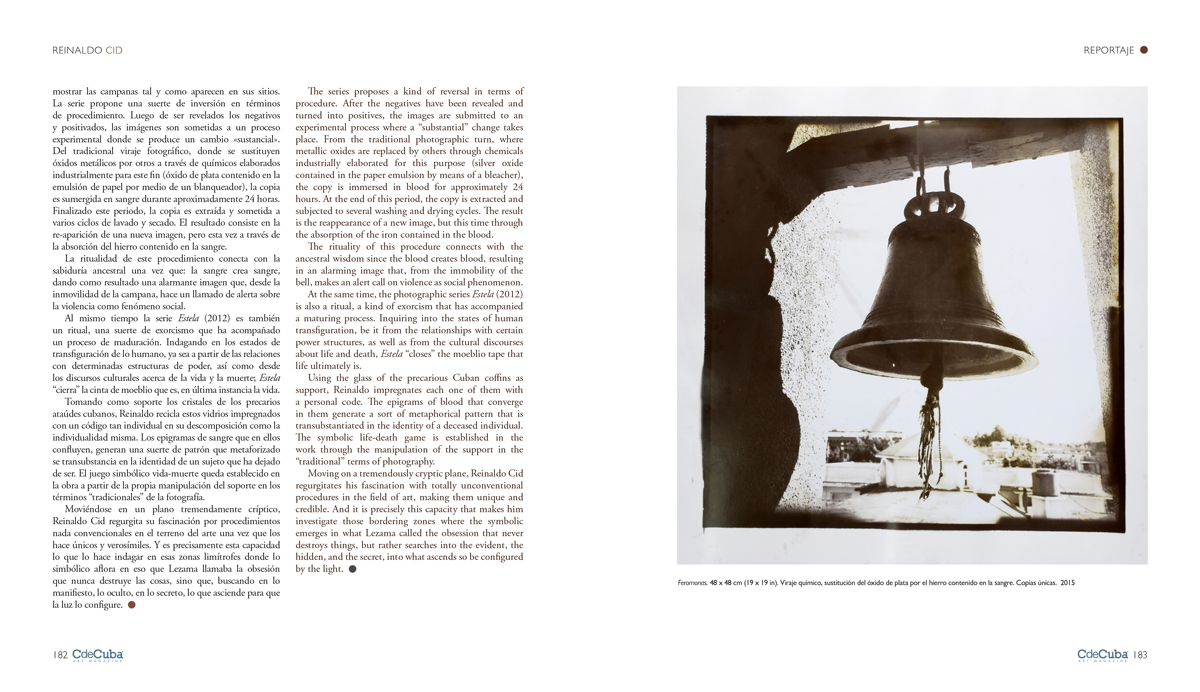