“In our times, the only work truly provided with critical sense

should be a collage of quotations, fragments, echoes of other works.”

Lazaro Garcia constructs his pictorial scenes as something mental; each planimetrical surface is a mosaic of quotations, allusions, and references to the History of Art, acting as visual memory from which the artist can freely extract each and every one of the fragments that embody his figurations. This plastic heritage is inserted in a new context by adding new semantic contents that turn the work into a dynamic construct.

Lazaro Garcia is the son of his time. His creations claim the postulates of postmodern painting, which make the painting a hedonistic product; where he intends to recover the figurative image from the process of handcrafted construction; where figuration appeals to the fragmentary,  the narrative; where the human figure and the object share the same level of spatial leadership; where paintings are conceived with freedom, the inclusion that allows articulation of both multiple constructive strategies and readings and interpretations around them. He represents his truth, creates his own stories, seeking to question with them the fluctuating expressions, the aesthetic-formal ruptures of the contemporary visual arts discourse as a very personal way of dialoguing with his time, circumstance, context.

It may seem to the observer that his scenes do not transcend beyond figuration, but his nature escapes even himself to go on a pilgrimage toward the spectator as a flight… Each one goes through what we call unique, personal, which appears as a theatrical pose, where each resource, both intellectual and visual, has allowed him to create his own language, which frames him within the history of Cuban art.

His compositional structures play with the optical principles, seeking to direct the glances. In this visual framework he appeals to the polyvalent nature of the symbol to create a dual structure moving between discursive and imagined. As far as construction is concerned, we can see that they are not subject to an immovable structure, each one varies as a consequence of the intentions.

(…) the language I articulate in my painting is a creature with its own life, in which everything is diluted, recreated, with new approaches emerging each time. It is committed with boosting a process of perceptual induction that presents the public with spontaneous schemes to consciously round up on the basis of a previous conceptual background. These schemes are organized according to a certain pictorial logic, structured from planes; the characters or objects are manipulated depending on the artist’s intentions and the incidences of the theme, evidencing a marked interest in the establishment of the “symbolic temptation”. His figurations are constructed by constantly rethinking styles and trends that were widely used in painting, and aesthetic principles close to the Renaissance, Mannerism, the Baroque or Classicism.

These scenes do not translate a sense of tangible reality to the spectator, nor do they allude to a specific historical moment; the elements are manipulated in pursuit of an intellectual-visual strategy. For this purpose the artist uses trompe l’oeil and allusions, creating isolation with the representation of reality. This is also the case with his open structures, which show the gift of timelessness, the disconnection of a specific physical-geographical space. They are rather serious representations, with few doses of sarcasm, a principle that does not allow him to lose that critical expression, but without an exacerbated trend towards the social. like many from his generation who used the resource of pastiche and appropriation as well as granting new meaning to well-known, traditional painting images to create a game of parodies or glimpses of humor resulting in ferocious social criticism.

From a very personal creative perspective, this artist has promoted a plastic language in which he places the elements in a new context from a symbolic point of view. A vast mastery of painting is outstanding in its technical-technological aspects, verified in the versatility of each of its representations. The readjustment of these materials that existed prior to his world view makes him generate atmospheres of strong iconographic presence, where the element loses its original value to adopt the one granted by the artist. In this case I assume it is not idle that certain traditional information underlies the object in order to boost certain ambivalence between its original state and the new forms of representation.

Underlying her figurations is what Alicia Serrano would call two moments of the appropriation: in which the artist extracts the element from its initial context and grants it the status of autonomous entity, and when it is decided to include it in a new space, distant from the original, starting a process to grant it new meaning. The image functions as a meaningful text that allows the viewer to leave its receptacle. The intentions are not only to grant new context or new meaning, but also to promote a new dialogue in the general forms of the ensemble, rewriting the information of each one and restructuring it in such a way that the icons not just work autonomously, but with a compact stage where author and receiver become actors of their particular story, reinforcing the polysemic, plural character of the image and the system of perception.

Lazaro Garcia assumes Postmodernism as cultural concept in his artistic production, and presupposes its feasibility when it comes to create his own codes, based on re-reading and intertextuality as the basis for his discourse, which has remained unchanged for several decades. The selection of pre-existing images becomes a profound need of introspection for this artist with regard to different topics. I clarify this, given that the use of these creative methods, already with a background of representation, can give rise to erroneous criteria, thinking that the works lack personality or that their intention does not go beyond the visual. In each group of images Garcia appropriates the components in a heuristically, giving way to an active and unlimited process of creative reinterpretation.

Lazaro’s work struggles between the current figurative concepts and the remnants of the Cuban aesthetics from the ‘90s, translated into creations of abundant ellipsis and symbolic mediations, of autonomous value that propitiate the opening of artistic communication; to the privilege of “the retinal”. Images of ample semantic load in which a careful manufacture is involved. They boast diverse compositions with ample degrees of complexity, where the figures are outlined with a marked attention to realism, but located in an unpredictable way; where the ambiguous allows the articulation of stable systems of explicit and implicit contents that are placed by the painter and the exegete as a formula of balance between the levels of distribution of the formal-conceptual contents.

Garcia opens himself to the subject of visual representation, seeking to create an entire model of seduction and rescue of the painting technique and technology in its pure-visible state that does not ignore or evade a certain system of thought that makes representation a valid and complex product. This artist assumes painting as his form of life; an involuntary way of getting lost in its framework, searching in each of its plastic forms for that material and subjective fragment that will take him to the genesis, to the virginal canvas, to the element that, according to Arheim, will mobilize space, disturb rest, like a stone thrown to the passivity of a pond. 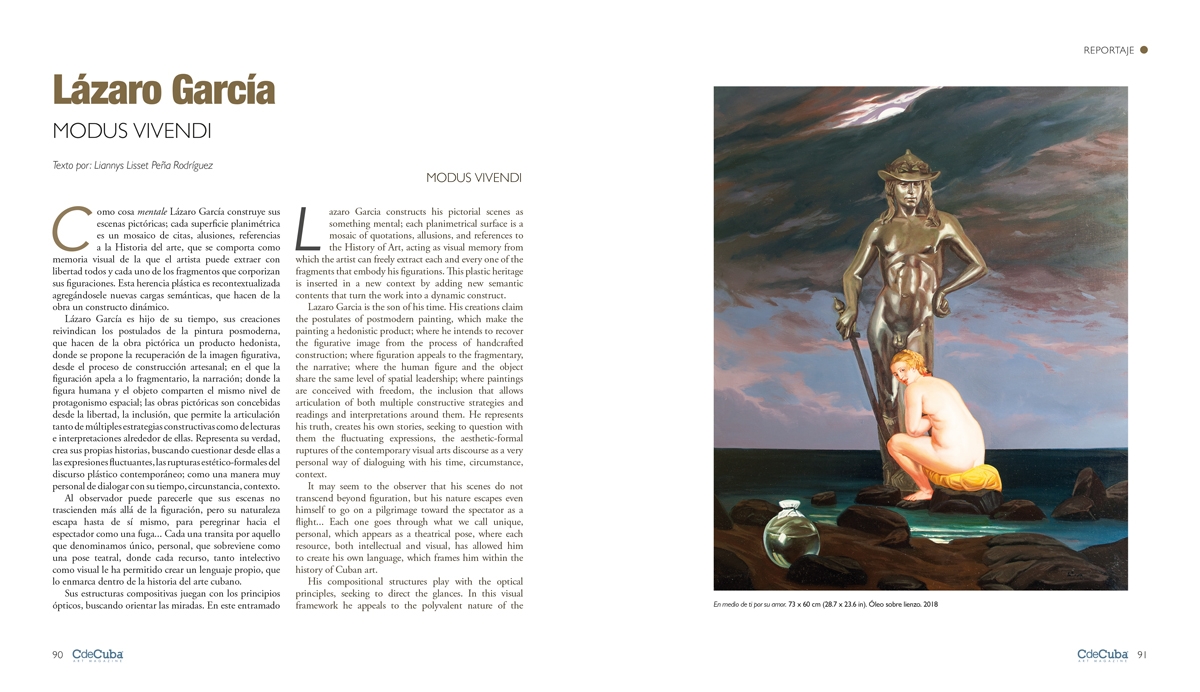 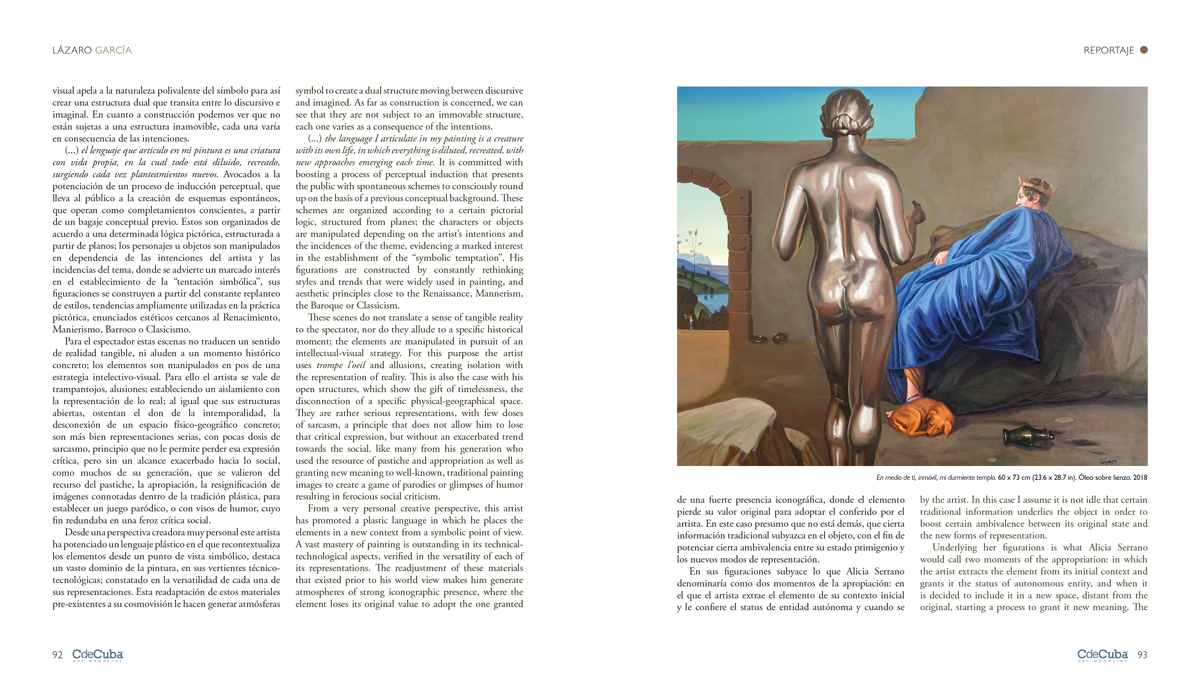 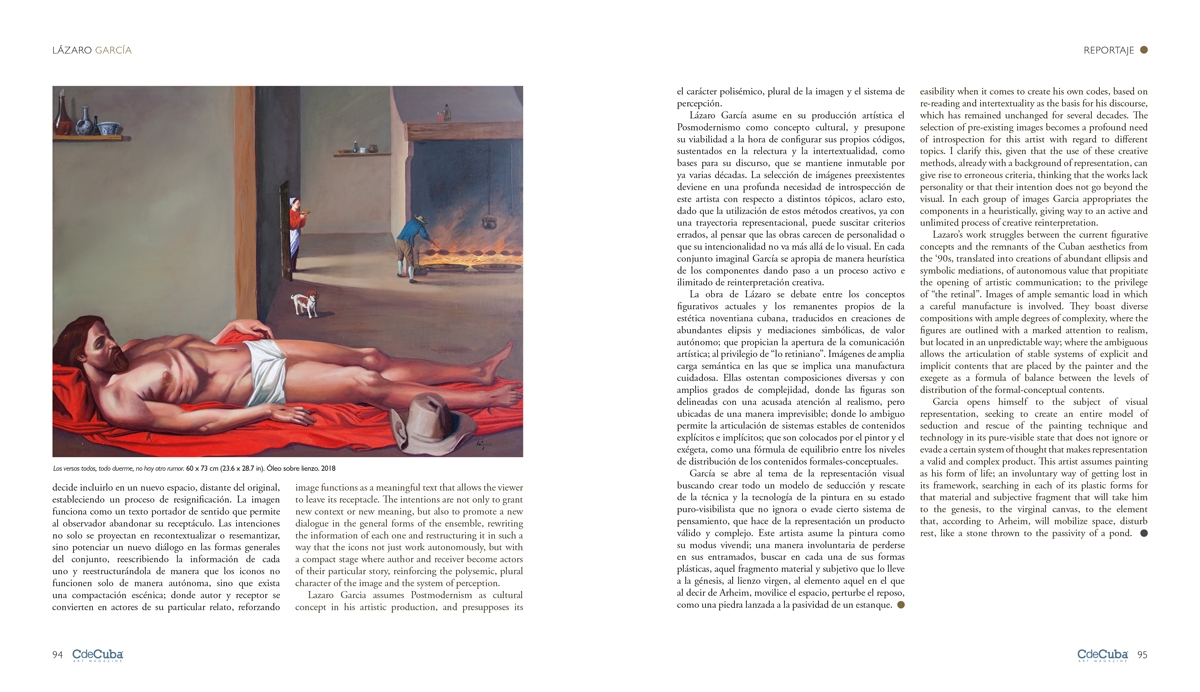 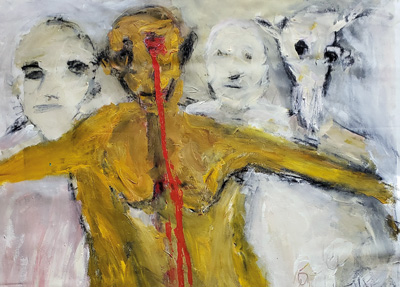 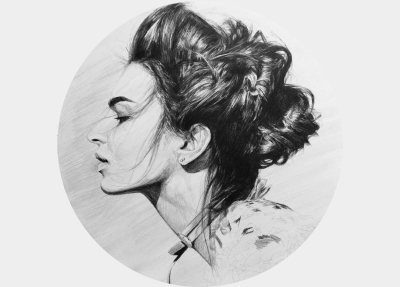 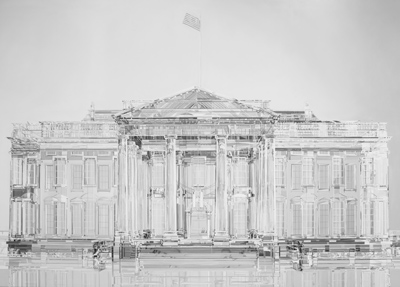