The city of Bernardo Navarro Tomas (Havana, 1977) stores the trace of a journey that multiplies between memory and the present. It is a space generated from obsessions and ruptures, the result of knowledge and of the daily experience raised to the aesthetic meaning of the representation. Born in the neighborhood of Vedado, in the capital, his discourse has developed under the influence of specific phenomena such as the Bauhaus aesthetics, expressionism and readymade, all combined with the strong influence of the Cuban environment, in which stand out the transgressor and non-conformist spirit of the painting generation of the 1980s and other artists of solid lineage like Antonia Eiriz and Raúl Martínez.

A visible aggregate of political connotation of his transit through pop art is revealed in the series Los nietos de Karl Marx (Karl Marx’s Grandchildren) (2013); and El coco te comerá (The Bogeyman Will Eat You) (2013); the latter is a totally satirical image where “the big leader” is reproduced in front of his own discourse. Next to that “great leader” he is a common protagonist in many of the works from this period, almost always coexisting with symbols that point at the culture and way of life of his natural enemy: the Empire.

Having moved from Havana to Brooklyn (where he currently resides) in 2004, he reconstructs and combines details of the two most important urban presences that make up his experience. We stand before a mind that changes but preserves the pigments of a zone related with affection and memories; an identity that integrates without traumas and learns to enjoy the development with full freedom to hand us the emotion of vertigo in the descent.

In the new habitat he experiences, unlimited, the unwonted freedom of color and forms. This is transformed into a sort of state of mind that penetrates him and provokes in him the urge of finding the face of the imagined city. We stand in front of the space comprised and interpreted through layers and textures, on occasions intervened by elements such as newspaper paper, where certain spelling elements attract attention. These characteristics stand out in most of his recent pieces, granting them a particular appearance, a kind of density that incites to meditation leaving a clear, pleasurable feeling.

Navarro has achieved a balance (of which he profits considerably) between the introduction of the concept and the prevalence of the form as visual instinct (which he calls visual textures); on occasions they suffice to ensure the legitimacy of the piece and its impact on the viewer. Fragments of his work comment the city through the dynamics of the citizens, while others make use of the constructive structure. One of the main characteristics of the work is the already mentioned color frenzy, which serves to support a forceful subjectivism.

Several of these pieces stand out for their circular format. A somewhat rustic, challenging geometry is discovered particularly in some of them, eager to display its metaphorical capacity from the infinite possibilities of combinations enclosed among said forms, suggesting situations and conducts referred to present tensions.

One of his current works is the series City Aura (2018), where austerity (paper and crayons) and detachment are present. In it he practices the strategy of calming the instincts to obtain a lively harmony from his contributions, and where colors transform themselves into sounds in unwonted form. We are convoked to the melodious feast of the forms, to the dismounting of the daily habitat of millions of people, transformed into a joy that eventually resembles a plural chant of birds. 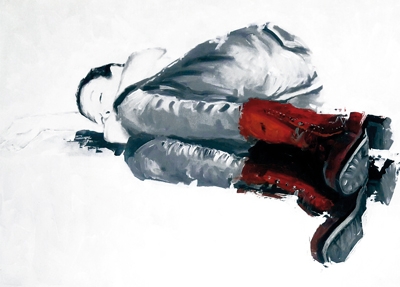 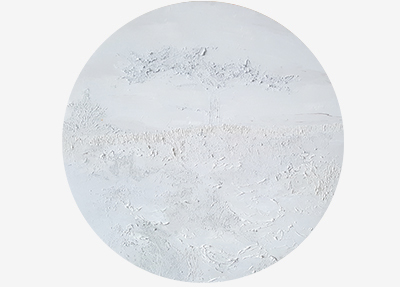 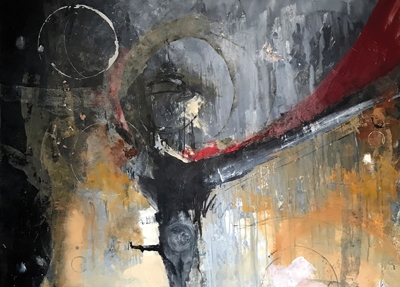